Salt in the Wounds - eReaderGirl Skip to the content 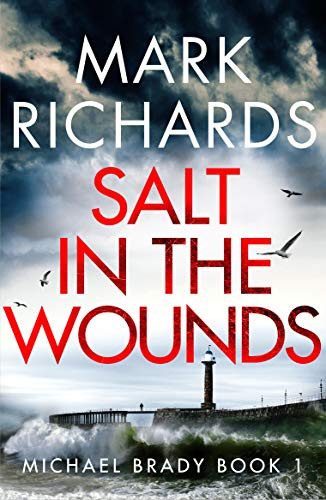 Salt in the Wounds by Mark Richards

His best friend has been murdered, his daughter’s in danger.

There’s only one answer. Going back to his old life.

The one that cost him his wife…

Michael Brady was a high-flying detective, working on a high-profile case.

And much too close to the truth.

Someone arranged a hit-and-run.

But they missed Brady. And hit his wife.

And after six months sitting by her bed, he took the only decision he could take. He turned the machine off.

Now he’s back home in Whitby. Trying to rebuild his life. And be a good dad to his teenage daughter.

But when his best friend is murdered Brady - unwillingly at first - is drawn into the investigation.

And when the only people he has left are threatened, he finds there’s only one answer.

Going back to his old life…

Salt in the Wounds is the first novel from award winning writer and blogger Mark Richards. It’s set in Whitby, on the North Yorkshire coast, and tells the story of former Detective Inspector Michael Brady. His wife’s dead and he’s back in his home town - trying to rebuild his life and be a good dad to his 13 year old daughter.

So I had to make the decision. For my daughter. Her life was on hold. And she needs someone. At least I’ve got a sister here. God knows Ash isn’t going to ask me if she has a problem with her periods.

But then Brady’s best friend is murdered. And if he’s going to stop the wrong person going on trial, there’s only one option. He has to act.

He couldn’t let someone else control his life. Especially when ‘someone else’ was Bill Calvert. He owed it to Grace, to Ash. Most of all he owed it to himself. He hadn’t asked for this. But he had to deal with it. Sort it out, find the killer. And then start his new life. ‘I love you, Grace,’ he said. And walked back down the cliff path…

…And finally, Brady has to risk everything.

This was the moment to turn back. Wait for some uniforms. Say, ‘He’s down there. At the end of the pier.’ Leave it to someone younger, fitter. Someone without a daughter. But Gorse was waiting. And he had Carl. And he knew. He knew who’d killed Grace…

Salt in the Wounds is the first book in a series of six. The second book in the series will be published just before Christmas