Rise of the Sea Witch - eReaderGirl Skip to the content 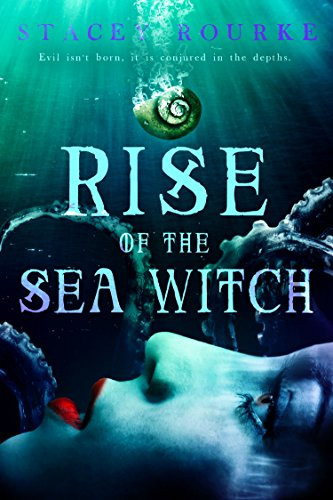 Rise of the Sea Witch by Stacey Rourke

Details of the sea witch’s banishment have been exaggerated. The body count that preempted it was not. Once an illustrious princess, her hands and tentacles were stained with the blood of thousands. No one could comprehend how the hooks of madness dragged her down from her life of privilege.Born Princess Vanessa of Atlantica, the ambitious young royal was one of two children born to the great King Poseidon. She and her brother, Triton, were groomed from birth to rule. Yet only one would ascend that coveted throne. While carefree Triton flits through his training with a cavalier demeanor and beguiling charm, Vanessa’s hunger for her father’s acceptance drives her to push herself to the limits of magic, and combat to become a leader worthy of her people. When war against the humans ravages their once regal kingdom, political sides are chosen. Factions from the seven seas challenge the existing leadership, pitting Vanessa against her brother in a vicious battle for the crown. Traitors are exposed, dark family secrets revealed, and a once strong sibling bond is strained to its breaking point.Only when the ink black waters from the ultimate betrayal rescind, will the truth be known of how the villainous sea witch rose with one name on her vengeful lips--Triton.REVIEWS:"Reading this story from Vanessa’s point of view was truly fascinating and I was 100% emotionally engaged with this character. So, to see how Vanessa was pushed and manipulated into a situation where the outcome led to Ursela the Sea Witch was nothing short of heartbreaking. Still, despite everything that was happening to her, Vanessa loved her brother and it makes me tear up every time I think about it." -The Genre Minx Book Reviews"Rise of the Sea Witch is a fantastic fairytale. I was instantly impressed by Vanessa. She's strong, talented, capable and she cares deeply, but she's being treated unfairly. She hardly has any support and she repeatedly has to fight battles against those who should protect her. I loved her determination and resilience. She's going through so much, but she never gives up, even if her heart is being shattered and those who should stand by her betray her in the worst possible way. I was fascinated by her personality and her journey from beginning to end." -Amazon Review"Vanessa has very big heart and has always wanted what was best for her people but after a while when people just keep turning against you and putting you down it starts to take its toll and it will and can turn the softest hearts hard and that is just what happens to Vanessa. Her poor little merheart can’t take it anymore and must fight back for what is right." -Avid Reader"Rise of the Sea Witch is fraught with unimaginable pain and loss, but also the underlying theme of reinventing oneself, and even when facing uncertainty, accepting and owning your own actions. Be who you were born to be." -Amazon Review