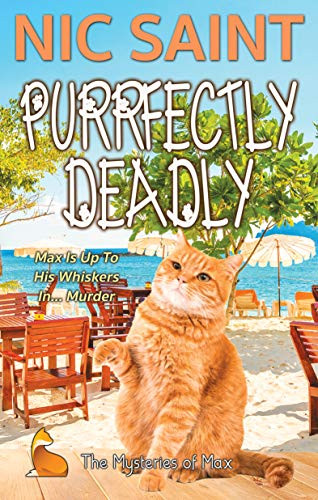 This feline sleuth is up to his whiskers in murderWhen famous eighties pop star John Paul George is found floating face down in his pool, Hampton Cove’s premier sleuthing tabby Max and his feline friends are on the case. Soon they’re chasing leads and following clues, helping their human Odelia Poole, reporter for the Hampton Cove Gazette, solve the murder.Meanwhile, new cop in town Chase Kingsley has his own problems to deal with. An old scandal threatens to get him kicked off the force. And even though Odelia and Chase don’t always see eye to eye, she decides to help him clear his name, even if it means keeping Chase’s cat Brutus, Max’s self-declared nemesis, in town.Soon Max is up to his whiskers in drug dealers, boy toys, disgruntled ex-wives and even more drug dealers, all while competing with Brutus for the title of Hampton Cove’s one and only ‘true detective.’ Will the feline sleuths save the day? And will they finally get a taste of John Paul George’s famous cat pâté? Find out in Purrfectly Deadly, the second book in the humorous cat mystery series The Mysteries of Max.