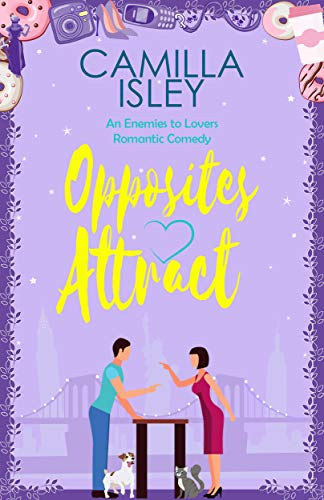 Single mom Vivian has been burned by love once before, and her job as a divorce lawyer has presented enough evidence to convince her there are no good men left in New York City.

The worst offender is her new neighbor: Dr. Lucas Keller, a couple’s therapist whose piercing blue eyes and flawless dark hair are just as annoying as his bad temper.

And when Lucas starts poaching Vivian’s clients by saving their marriages, she makes it her mission to force him out of the building to save her practice. But it’s Lucas who gives her the perfect opportunity when he proposes an unexpected bet.

With their offices at stake, Vivian and Lucas play the field of love in a fierce battle of wits that quickly turns hot and personal, especially when Vivian’s daughter gets involved. Now, taking down Lucas has become more than business for Vivian. It’s become a pleasure—and soon, Vivian and Lucas will realize how pointless it is to fight the laws of attraction.

A fun, neighbors to lovers romantic comedy filled with heart. Be ready to laugh and swoon. Chick Lit Post

This is Camilla Isley at her very best, it’s funny, it’s touching, it has threads of a tricky storyline, and the banter and chemistry between to the two leads is rather evident from the beginning and it's just a sheer pleasure to read. Rachel Random Reads