Fury of a Highland Dragon - eReaderGirl Skip to the content 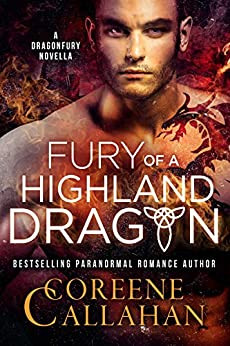 Fury of a Highland Dragon by Coreene Callahan

Trapped by a future she refuses to face…

Accused of cyber espionage by the United States government, ethical hacker Ivy Macpherson is now on the FBI’s most wanted list. Out of options, she runs, desperate for time to prove her innocence. When fate takes an unexpected turn, bringing her face-to-face with Tydrin, she must decide—trust a man more dangerous than the hunters on her trail to keep her safe. Or risk capture by a covert agency well known for ruthlessness.

Condemned by a past he doesn’t want to remember…
Cursed with a terrible temper, Scottish dragon-warrior Tydrin struggles to atone for a mistake that took innocent lives. Unable to forgive himself, he returns to the scene of his crime in hopes of finding absolution, but discovers a woman in need of his help instead. Intervening in the nick of time, he whisks Ivy to safety, only to realize the daughter of the family he wronged is the one destined to steal his heart.

What readers are saying about the Dragonfury series:

“Modern day fantasy and paranormal with hot romance, Coreene Callahan has created memorable characters and a seemingly impossible situation. That is storytelling at its best!” - Reader’s Entertainment Book Reviews

“Action, adventure and a sassy attitude light this fabulous take on the classic battle of good vs. evil. Callahan entertains readers right from the beginning, adding a dose of treachery as the book progresses. The redemption of two tortured souls as they strive for happiness makes for enjoyable reading.” - RT Book Reviews, 4½ stars for Fury of Desire;