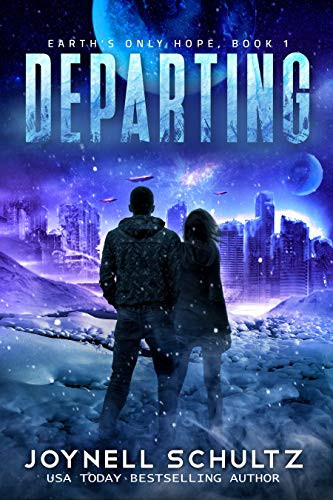 I thought dying in prison was my only option…
…then I was given a choice.I can either board an alien spaceship with 400 fellow criminals or rot in prison on a freezing Earth.The spacecraft's captain, a handsome alien who looks remarkably human, has been visiting me in my dreams for over a year. He has given me the companionship I need during my time locked up in solitary confinement, and the way he holds me in my mind makes me forget the Earth is on the brink of extinction.But was that nothing but my imagination? The alien in question doesn’t seem to know anything about the hours we spent together.Humanity will be wiped out soon, and despite all of this, if I get on that ship, I have a chance at surviving.And I’m a survivor.Only a deadly disease is spreading among the aliens and has already killed the majority of their population. It appears to be a virus, but as the aliens continue dying despite all precautions, I begin to wonder if the disease is something else.How do I keep the man I’ve fallen in love with safe? (Even if he has no idea who I am?)

And if he dies, along with the rest of his alien race, how will us humans navigate the unfamiliar solar systems in a spaceship we don’t know how to operate?But if the disease spreads to the humans on board, none of this will even matter.Read this romantic post apocalyptic SciFi adventure today!(Also available for FREE in Kindle Unlimited.)Books in the Earth’s Only Hope Series:Connecting (Book 0)Departing (Book 1)Surviving (Book 2)Returning (Book 3)