A Hero to Her Rescue - eReaderGirl Skip to the content 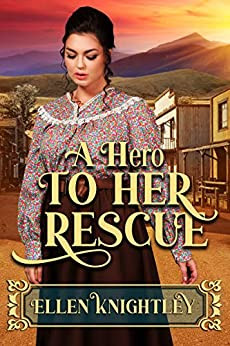 A Hero to Her Rescue by Ellen Knightley

When Daisy Stoddart finds her brother robbed and killed, she is forced to leave everything behind and flee to safety. Hiding under the assumed name Sadie, she lives with the fear that her brother's killer will come after her too. Since the main suspect is her own cousin, her worry and anguish are well-founded. Being on the run for five years and constantly looking over her shoulder, her exquisite lace-making skills will bring her to Quest Junction. There, she will meet a gruff but handsome sheriff, who will quickly capture her heart in spite of his surly attitude. At long last, could Daisy have finally found a place to call home and someone to make her feel safe and loved again?

Carrying the heavy burden of a past mistake, Mackenzie Lewis has made it his business to be the perfect sheriff. The townsfolk of Quest Junction ignore his brusque demeanor, knowing that he would do anything to keep them safe. Comfortable in his solitude, he has no room for a woman in his life, until Sadie arrives in town and changes everything. From the moment their eyes meet he can tell she's hiding something, and yet he finds himself intensely drawn to her. As time goes by, his affection and a powerful need to protect her keep growing, leaving no doubt that he is falling for her. After his own life is put at risk, will he still be able to let his guard down and open up his heart?

While Sadie and Mac grow closer, awful truths from her tragic past are about to come to light. When her cousin suddenly arrives in town, the mystery surrounding her brother's death begins to unravel, and Sadie is placed in terrible peril. Will the brave Sheriff manage to save the woman he loves and bring justice for her brother? Will she find in his eyes an answer to her prayers or will outside forces threaten both their lives and their chance at happiness?


"A Hero to Her Rescue" is a historical western romance novel of approximately 80,000 words. No cheating, no cliffhangers, and a guaranteed happily ever after.